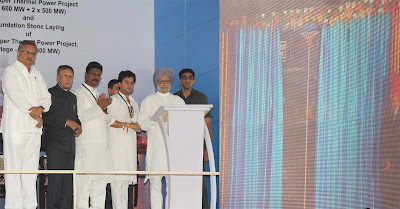 PRIME Minister Manmohan Singh on Thursday used a remote to lay the foundation stone of NTPC’s Lara Super Thermal Power Project situated in Chhattisgarh’s Raigarh district. In fact, PM flew to the state, but…
he went to Sipat in Bilaspur district where he dedicated 2980 MW Sipat Thermal Power Plant, also built by NTPC, to the nation.
Among the dignitaries present there included minister of state (independent charge) of power Jyotiraditya M Scindia, Governor Shekhar Dutt and chief minister Raman Singh.
Lara Super Thermal Power Project’s stage-I will produce 1600 MW of power. It has been built at the cost of around Rs 11,741 crore, according to a statement issued by the ministry of power.
According to the MoU signed between Chhattisgarh government and the NTPC on July 12, 2009, Chhattisgarh will be getting 50 per cent of the generated power and the remaining 50 per cent will be shared by other states -- Madhya Pradesh, Maharashtra, Gujarat, Goa, Daman and Diu as also Dadar and Nagar Haveli.
Meanwhile, PM inaugurated 2,980 MW coal-based Sipat thermal power plant having three units of 660 MW and two units of 500 MW, which are already operational.
NTPC will source the coal from Korba’s Dipka extension mines of SECL for the Sipat project. Significantly, fuel is transported through NTPC’s own rail transportation system. The water for the plant is sourced through a 16-km pipeline from the banks of the Hasdeo barrage canal, from Hardivishal village in the district, said the statement.
Posted by IPS at 1:50 PM