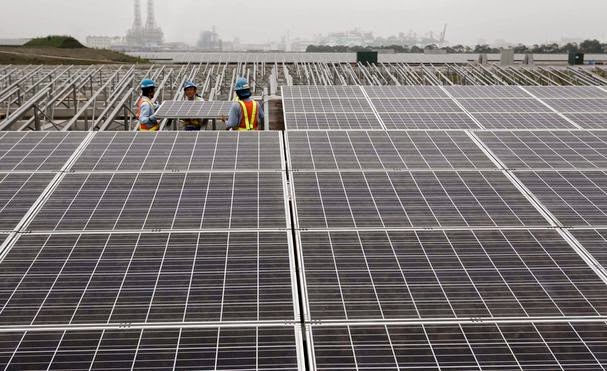 NORTHEAST India's biggest solar power plant in Tripura has begun commercial production. The state-owned Miniratna PSU North Eastern Electric Power Corporation (NEEPCO) has commissioned the first-of-its-kind 5MW capacity solar power plant at Monarchak in western Tripura.
"The solar power plant was set up at...
a cost of Rs.40 crore. The entire power from the plant would be transmitted to the Tripura power grid," NEEPCO general manager S.R. Biswas told reporters.
To generate power, 23,616 solar panels were integrated with the Monarchak power project area, where NEEPCO has also commissioned a separate 101-MW capacity power plant.
"Following the government policy, NEEPCO has initiated the process to set up more and more solar, non-conventional and renewable power plants in various parts of the country," he told reporters.
He said the corporation will set up a 50-MW solar power plant in Madhya Pradesh and a two-MW capacity plant at Lanka in Nagaon district of Assam.
The 101MW-capacity power plant is expected to start experimental generation from February 20.
NEEPCO, a mini-ratna company under the union power ministry, has set up the Rs.9.5 billion (nearly $150 million) gas-based power plant in Monarchak, 70 km south of Tripura capital Agartala.
The NEEPCO official said non-supply of gas by ONGC (Oil and Natural Gas Corporation) led to huge delay in commissioning the power project resulting in the loss of Rs.five crore a month for the past several years.
"The ONGC, after many negotiations and meetings, started supplying gas to the power plant since earlier this month and, accordingly, we synchronised the system," Biswas maintained.
The foundation stone of the Monarchak power project was laid during the previous NDA government in March 2002 and the state government allotted land to NEEPCO in 2003.
NEEPCO, the major power producer in Northeast, generates 40 percent of the total effective installed capacity of the region and provides 47.6 percent of energy requirement of the region.
With an installed capacity of 1130 MW, NEEPCO operates one of the largest hydro and thermal power plants in the region and is the only CPSU having hydro and thermal power stations in operation.
North Eastern Electric Power Corporation Limited was set up in 1976 to plan, investigate, design, construct, generate, operate and maintain power stations in the NE region.
Posted by PSU revival at 7:44 AM