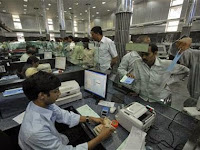 GOOD news for around 7 lakh 50 thousand employees of public sector banks as they will soon get 15 percent pay hike, arrears for the last 30 months, and other benefits as part of a deal that the unions and bank managements have reached.
The unions, under the aegis of the United Forum of Bank Unions, and bank managements, represented...
by the Indian Banks’ Association, have sorted out a detailed Bipartite Settlement/ Joint Note and the same will be formalised on May 25, reports a business daily.
The benefits are a special pay, a new hospitalisation scheme backed up by insurance and holiday on every second and fourth Saturday in a month.
Not only this. The employees will also receive the arrears of last 30 months that will undoubtedly send them into celebratory mode.
S Nagarajan, general secretary, All India Bank Officers’ Association, said “A special allowance has been introduced for employees… there is a new hospitalisation scheme backed up by insurance.” The hike will benefit 3,04,000 odd officers (as on March 31, 2012) in the banking sector.
Officers will get health insurance cover of Rs 4 lakh and the clerical and sub-staff will get Rs 3 lakh cover, he added.
“Five years is the tenure of the wage settlement. We have already exhausted 30 months in coming to a settlement. It’s time now to submit the next charter of demands,” Nagarajan said pointing that the last wage settlement expired in October 2012.
Vishwas Utagi, Vice President, All India Bank Employees Association, said the wage settlement will benefit about 4.50 lakh clerical and sub-staff in the banking sector.
Bank employees will get close a couple of lakh rupees, on an average, as arrears in gross terms, he explained. Since payrolls are computerised, the arrears could be credited to employees’ accounts in a month.
The issue of upgradation of pension of retirees and 100 percent neutralisation of dearness allowance will be taken up by the United Forum of Bank Unions separately, Utagi said.
Posted by PSU revival at 7:49 AM