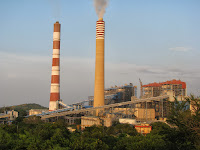 NTPC, India's largest power producer, will raise $1 billion through foreign currency bonds this year to expand its power generation capacity, particularly in renewable energy segment.
"NTPC board has approved the proposal to raise up to $1 billion through foreign currency bonds subject to market conditions and as per requirement in the board meeting held on 28th April," an NTPC spokesperson...
was quoted as telling a news agency.

He said that the Maharatna PSU will approach the market for raising funds through foreign currency bonds this year.
The power producer envisages that the renewable energy will contribute 28 per cent to its capacity of 1,28,000 MW by 2032.
The government plans to have 1,60,000 MW renewable power generation capacity by 2022 for which, an investment of $250 billion would be required.
Earlier allaying fears over meeting renewable power capacity addition target, Power Minister Piyush Goyal had said: "If the government moves with some vision, it is not impossible to make India diesel-generation free.”
The PSU has set a target to more than double its current installed capacity to 90,000 MW in the next ten years.
At present, NTPC generates 44,398 MW of power from all sources of energy. Out of this, 12,115 MW or 27 percent of the total was added in the last four and a half years.
With an installed power capacity of 43,143 MW and an additional 23839 MW capacity under construction, NTPC is the largest power utility in India. To realize the vision of becoming a world class power major, NTPC plans to become a 1,28,000 MW company by 2032.
Posted by PSU revival at 9:54 AM