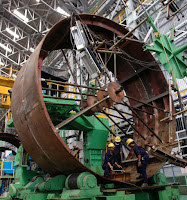 IN A major boost to Narendra Modi's pet project Make in India, the Indian Navy’s Directorate of Naval Design, in collaboration with Defence Research and Development Organisation (DRDO) and PSU steel major Steel Authority of India Ltd (SAIL), has developed a special grade of steel for indigenously designed nuclear-powered stealth submarines.
The initiative for local...
production of the new grade of steel would allow the country to progress on indigenous development of nuclear-powered submarines, reported a financial daily.
It would also help the country to save precious foreign exchange.
Codenamed DMR292A, the new variety of steel has been tested for use by nuclear powered submarines at SAIL’s Rourkela plant and it has been developed exclusively for “underwater projects”.
“This a big achievement for the country as other exporting nations that produce the special steel were either unwilling or unable to continue selling it to India. In the absence of the domestic R&D initiative, India’s indigenous submarine development programme would have moved back by several years,” senior officers from DRDO was quoted as telling the Financial Express.
The new special steel is far more sturdier than ordinary trpe and is capable of being used in temperatures as low as minus (-) 40°C.
This makes the steel almost unbreakable, but it could be bent to suit tailor-made requirements of the armed forces.
Maharatna PSU SAIL is already actively participating in projects of the Indian Navy.
It is supplying steel for country’s single largest military platform — a 42,000-tonne Indigenous Aircraft Carrier.
SAIL has so far delivered about 28,000 tonnes of the warship-grade steel for the Indigenous Aircraft Carrier-1, called Project 71 (P-71).
SAIL has set up exclusive facilities at a Special Plates Plant in Rourkela to meet the requirements of the aircraft carrier. A team of scientists of the Defence Metallurgical Research Laboratory worked with technologists to develop and set up a production line of the steel, called DMR249A at the Bhilai plant over the last seven years.
Another variant called DMR249B, was made at the Alloy Steel Plant in Durgapur. It is used in the repair of the Indian Navy’s Russian-origin Kilo-class submarines and to build anti-submarine warfare corvette, the INS Kamorta.
“The special steel has twice the price of other grades of industrial-purpose metal but comes at almost half the cost of the imported variety. This would help in saving foreign exchange,” said a SAIL executive.
SAIL is also producing armoured plates for Russian-origin T-72 and T-90 tanks, the indigenous Main Battle Tank ‘Arjun’ and for mine-protected vehicles.
Posted by PSU revival at 11:04 AM