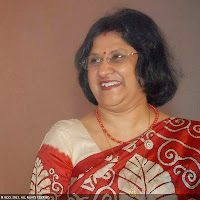 IF SELECTED, it will be yet another glorious feather in her glorious cap. State Bank of India chairman Arundhati Bhattacharya is in race for the top job at the Securities and Exchange Board of India (Sebi). The government in coming weeks will finalize the successor to incumbent U K Sinha, whose term ends on February 17, 2016, reports a national daily.
In case she is appointed, Bhattacharya would become the first commercial banker to lead the market regulator. Although three former Sebi chairmen were from IDBI, they were appointed before the development finance institution was converted into a commercial bank.
Among the candidates being tipped to head the market...
regulator are more or less bureaucrats or have a regulatory background. They include some Sebi board members, Ramesh Abhishek, former chairman of the erstwhile Forwards Market Commission (FMC), and former RBI deputy governor Subir Gokarn.
Sebi chairman is equivalent to that of a secretary in the government. The position has gained importance following FMC's merger with Sebi.
Earlier, the government had floated an advertisement seeking applications for the post on August 24, seeking candidates, aged 50-60 years. The post was thrown open to the private sector.
The committee included the cabinet secretary and the economic affairs secretary Shaktikanta Das. The notice listed "a person of ability, integrity and standing who has shown capacity in dealing with problems relating to the securities markets or have some special knowledge or experience of law, finance, economics, accountancy, administration or in any other discipline" as the eligibility.
Among the former chiefs of Sebi, M Damodaran and S S Nadkarni had worked as chairmen of IDBI before taking charge, while the marker regulator's first head, S A Dave, was an executive director at IDBI. Sinha, prior to taking charge at Sebi, was chief of UTI Mutual Fund. His predecessor C B Bhave, a former bureaucrat, headed the NSDL.
In 2013, Bhattacharya, then 57, created history when she took charge as the first woman chairperson of the country’s largest lender, State Bank of India (SBI). Bhattacharya has rich experience across almost all major business segments ranging from retail and corporate finance, treasury and international operations. Her balanced approach on handling issues will be crucial for her top job. She doesn’t hesitate to take tough decision. Bhattacharya is the most powerful woman in the Indian business sector, according to Fortune India.
Posted by PSU revival at 10:45 AM