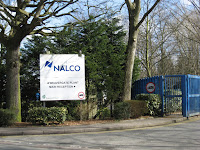 NATIONAL Aluminium Company Limited (NALCO) has declared an interim dividend of 25 percent amounting to Rs 322.16 crore for 2015-16 on the paid-up equity share capital of Rs 1,288.62 crore.
Union Steel and Mines Minister Narendra Singh Tomar was presented a cheque for Rs 260.72 crore by NALCO CMD Tapan Kumar Chand as interim dividend on the 80.93 percent shares held by Government of India, a Nalco release said. The interim dividend...
of 25 percent means Rs 1.25 per share of Rs 5 each, it said.
Praising the effective functioning of NALCO despite sluggishness in the market, he appreciated the company's all-time high bauxite production of 63.40 lakh tonnes and 19.53 lakh tonnes of alumina in 2015-16. NALCO, which started its commercial operations in 1987, has been earning profits consistently and has been declaring dividends since 1992. In 2014-15 fiscal, the company had declared a total dividend of Rs 451.02 crore.
NALCO has paid a total of Rs 5,679 crore as dividend including Rs 4,860 crore as share of government, the release added.
The company's shares closed up nearly 10 percent on April 18 after the PSU said that its board will discuss the estimated Rs 3,250 crore share buyback plan.
NALCO in a regulatory filing said, "A meeting of Board of Directors of the company will be held on April 22, 2016, inter alia, to consider the proposal for alteration in articles of association of the company and buy-back of the fully paid-up equity shares of the company."
The government may raise about Rs 3,250 crore by selling 25 percent of its shares to NALCO.
In January, Mines Ministry had said Finance Ministry asked it to allow Nalco to buy-back 25 percent of governments stake in the Navratna company in a bid to tap PSUs funds to make up for shortfall in disinvestment proceeds.
Earlier, the government planned to sell 10 percent stake in Nalco to raise about Rs 1,300 crore but volatile markets have derailed its plans. Presently, the government of India holds 80.93 percent equity of NALCO. National Aluminium Company Limited (Nalco) is a Navratna CPSE under Ministry of Mines. Established on 7th January, 1981, with its registered office at Bhubaneswar, the PSU has integrated and diversified operations in mining, metal and power with sales turnover of Rs 7024 crore in financial year 2013-14.
NALCO is the first Company in aluminium sector in the country to venture into international market in a big way with London Metal Exchange (LME) registration since May, 1989. The PSU is listed at Bombay Stock Exchange (BSE) since 1992.
The PSU has forged a JV company with Nuclear Power Corporation of India Limited (NPCIL) for establishing 2X700 MW Nuclear Power Plants at an estimated investment of Rs. 11,459 crore at Kakrapara in Gujarat. For development of downstream ancillary industries, a JV Company has been formed with IDCO, Odisha for Angul Aluminium Park.
Posted by PSU revival at 9:30 AM