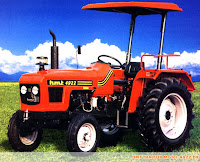 DASHING last hopes of over 1,100 employees for revival of the tractor unit of HMT factory in Pinjore, the Union Cabinet last week approved the closure of the factory and disbursement of VRS to all its employees. Asserting that the tractor division was incurring losses and its continuation with its insignificant market share in the sector might not be a financially viable option for...
HMT Limited, the Cabinet stated that the unit be closed down and focus be shifted on the machine tools unit.
“In view of the deteriorating position of the company and hardships being faced by employees due to non-payment of salaries and other dues, the tractor unit be closed down and attractive Voluntary Retirement Scheme (VRS) be given to its employees at 2007 notional pay scales,” read the order.
A budgetary support of Rs 718.72 crore was announced for the factory for payment of outstanding salaries, other employee-related dues, VRS and clearing of the tractor division’s liabilities towards banks and creditors.
Over 1,100 employees of the tractor unit have not been paid their salaries since July 2014 while statutory dues have been pending since November 2013.
The decision will have a financial implication (cash outgo) of Rs 718.72 crore for payment of outstanding salary, wages and statutory dues, VRS/VSS ex-gratia payments and clearing of tractor division’s liabilities towards banks and creditors.
A central public sector enterprise, HMT tractor division was established in Haryana in 1971 to manufacture HMT tractors. But, the performance of the company began to decline in the 1990s. The government highlighted that several efforts were made in the past to arrest the declining trend, but no success was achieved, following which the decision on closure was taken.
The cabinet, chaired by Prime Minister Narendra Modi, also given its approval for transfer of select small parcels of HMT land at Bengaluru and Kochi to different government entities for their use in larger public interest."
“Performance of the company started to decline in the 1990s, in the post-liberalisation economic environment with rising costs, stiff competition from international players and availability of imported goods at cheaper rates,” the release said, adding several efforts were made in past to arrest the declining trend but it could not succeed to turnaround.
HMT was established at Bengaluru in 1953 with the objective of producing machine tools required for building an industrial edifice for the country. It played a key role in laying the foundation for evolution of engineering and manufacturing capabilities in the country.
Posted by PSU revival at 5:38 AM