BHEL to form JV with Kawasaki for metro coaches: Report 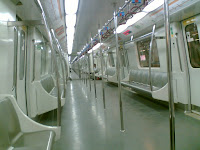 STATE-run Maharatna PSU BHEL (Bharat Heavy Industries Limited) and Japanese company Kawasaki Heavy Industries (KHI) are likely to form a joint venture to make locomotives and steel coaches for metro trains in India. A media report says talks are on in this regard. If the two firms join hands, BHEL's Bhopal unit will be able...
to raise its turnover by Rs 1,500 crore to Rs 2,000 crore, the media report quoted a BHEL source as saying.
"Talks with Japanese firm Kawasaki are going on and are at an advanced stage. Bhel's Bhopal unit specialises in making motors and related systems such as control panels, alternators and propulsion systems. The unit will be given priority for making steel coaches," the source said.
Many states are developing metro rails and two lines of 32 km each have also been proposed in Bhopal and Indore. "As of now, the company supplies motors and other related systems to Indian Railways," the source said.
The Bhopal unit, which is also the mother unit of the Maharatna PSU, has delivered a profit during a difficult FY16.
The JV will be concretised by financial year 2019-20. The company is expected to make 1,500 coaches over a period of 15 years, or 100 coaches per year.
"Though other units like Jhansi and Hardwar may also manufacture and supply such systems for metro, the Bhopal has a geographical edge due to its central location. Besides it has an adequate trained workforce, material handling facility and shopfloor. The unit can prune certain existing products and can replace them with the steel coaches," the source further said.
BHEL has supplied motors and other parts to the integral railway coach factory for the Kolkata metro, Diesel Locomotive Works, and Chittranjan Locomotives Works, Varanasi of the Indian railways. It also supplies to various zones of Indian Railways.
Profits of BHEL plunged by 82 per cent during Q1 2015-16 over the past year, owning mostly to their decrease in sales to the power sector. Today, with 20,000 MW per annum capacity for power plant equipment manufacturing, BHEL's mammoth size of operations is evident from its widespread network of 17 manufacturing units, two repair units, four regional offices, eight service centres, eight overseas offices, six JVs, 15 regional marketing centres and current project execution at more than 150 project sites across India and abroad. BHEL, which is under the administrative control of Ministry of Heavy Industries,  also has a widespread overseas footprint in 76 countries with cumulative overseas installed capacity of BHEL manufactured power plants nearing 10,000 MW including Malaysia, Oman, Libya, Iraq, the UAE, Bhutan, Egypt and New Zealand.
Posted by PSU revival at 9:00 AM