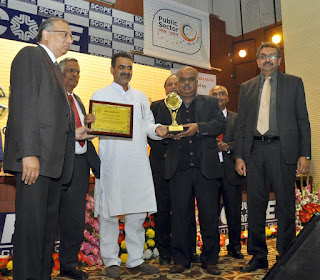 STATE-run Power Finance Corporation (PFC) has been conferred with the prestigious ‘CBIP Award 2017’ recently. R. Nagarajan, director (finance), A.K. Agarwal, director (projects) and D. Ravi, director (commercial) PFC received the ‘CBIP Award 2017’ for ‘Best Power Finance Company’ from Dr. Sanjeev Kumar Balyan, Minister of State for Water Resources, River Development and Ganga Rejuvenation on December 30.
Present on this occasion were S.D. Dubey, chairperson, CEA, G.S. Jha, chairman, Central Water Commission and V.K. Kanjlia, Secretary, Central Board of Irrigation and Power among others.
A Navratna PSU, PFC has been...
conferred with many prestigious awards including "KPMG-Infrastructure Today Award 2008" for its contribution in development of power sector. PFC has been providing financial assistance to power projects across the country including generation, transmission and distribution. The PSU has forayed into financing of other infrastructure projects which have backward linkages to the power sector like coal mine development, fuel transportation. PFC is also the nodal agency for the implementation of the ambitious UMPPs.
In a related development, giving a boost to Modi Government’s push for digital payment, the PSU will offer TV sets to residents of 1,600 villages in Arunachal Pradesh under its corporate social responsibility (CSR) programme, according to Union Power Minister Piyush Goyal. Speaking at the launch of GARV II, the second stage of the mobile app for monitoring the progress of rural electrification, the minister said: “There are villages in Arunachal Pradesh that have not had power for 70 years, they are virtually cut off from the rest of the country…PFC should endeavour to provide TV sets for these 1,600 villages.”
Goyal was referring to villages that do not have grid connectivity. A top Power Ministry official was quoted as telling a business daily that these TV sets will be capable of running on power from off-grid solar power modules.
The rural electrification resolve of the NDA-II government is focused on providing power to each household. Elaborating on the features of the GARV II app, Goyal said data has been mapped of about 6 lakh villages with over 15 lakh residents for tracking progress on household electrification.
Posted by PSU revival at 5:50 AM