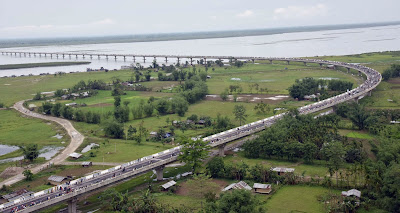 MAHARATNA PSU Steel Authority of India (SAIL) supplied most of the steel that went into construction of the country’s longest bridge Dhola-Sadiya built on river Lohit in Assam. The bridge was inaugurated by the Prime Minster Narendra Modi on May 26. The construction of the 9.15-km-long bridge began in 2011 under public private partnership. This bridge is 3.55 kilometers longer than Mumbai’s Bandra-Worli Sea Link.
SAIL has supplied around 90 percent or around 30,000 tonnes...
of steel, including TMT, Structurals and Plates for the bridge. The product mix offered by SAIL was one of the major criteria for selection of the company for this project, the company said in a statement.
SAIL has identified specific focus areas in the NE region for increasing its presence and market share and has adopted a structured approach to widen its footprints.In step, it recently appointed a General Manager to look after steel marketing in the area.
Supplying steel to remote areas of NE, tapping the high potential rural sector of the region, exploring the government’s thrust to improve the nation’s connectivity with North-east - have been identified as priority areas by the PSU. The state owned steel major is already supplying steel for several key infrastructure projects in the  region. Apart from the Dhola-Sadiya bridge, SAIL steel has also been used for constructing the Bogibeel Rail-cum-Road bridge, another infrastructural milestone in the state, several power plants including 750 MW power plant of NTPC & 600 MW Kameng Hydro-electric project, Trans Arunachal highway among others.
SAIL said it is in a position to offer better and more value-added steel for such projects as it is almost completing its balance modernization, with production of value added steels as a proportion of saleable steel set to cross 50 per cent, post modernisation.
Here are 10 key things to know about the bridge:
1. The bridge, spanning 9.15 km, is built across the Lohit river, which is a tributary of the Brahmaputra. It will connect Assam and eastern Arunachal Pradesh. The total length of the project, including the approach roads on each side, is 28.50 km.
2. Located 540 km from Assam’s capital Dispur and 300-km from Arunachal Pradesh capital Itanagar. It connects Sadia town in Assam’s Tinsukia district with Dhola village in Arunachal Pradesh.
3. The bridge will reduce the travel time between Assam and Arunachal Pradesh from six hours to just one hour as the distance will shrink by 165 km.
4. It is 3.55 km longer than the Bandra-Worli sea link in Mumbai. The sea link has now become the second longest river bridge in the country.
5. The construction of the Dhola-Sadiya bridge began in 2011 by the Ministry of Road Transport along with Navayuga Engineering Company Ltd., under the public-private-partnership agreement
6. A sum of ₹ Rs 2,056 crore has been spent on the bridge that can withstand 60 tonnes of weight, including battle tanks.
7. The bridge, which has a three-lane carriage way, will also cater to the strategic requirements of the country in the border areas of Arunachal Pradesh, besides facilitating numerous hydro power projects coming up in the state, as it is the most sought after route for various power project developers.
8. The bridge will make it much easier for Army convoys to reach outposts near the China border. It is also expected to boost tourism as there is no civilian airport in Arunachal Pradesh and this will make the road transport smoother.
9. The bridge will increase industrial investments with better border trade between the Northeast and South Asian countries.
10. State-run SAIL is the largest supplier of steel for the bridge. The PSU has supplied around 90% or around 30,000 tonnes of steel, including TMT, structurals and plates, for the bridge.
Posted by PSU revival at 9:30 AM