NTPC among first to list on LSE’s securities market 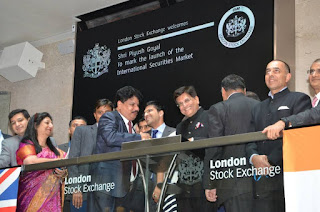 PSU major National Thermal Power Corporation (NTPC) is among the first bonds to list on a new International Securities Market (ISM) on the London Stock Exchange (LSE). The NTPC Masala Bond is available for trading this week on ISM following the publication of its rule book last week by Minister of state for power, coal and renewable energy Piyush Goyal.
“I am pleased that India’s NTPC is one of the first companies to list their...
recent Masala Bond on London Stock Exchange’s innovative new debt market. London has been a long-term partner for Indian firms looking to raise finance in the global capital markets and the development of an additional platform for the listing and trading of fixed income should be welcomed,” Goyal said.
The ISM is an additional market for the issuance and trading of UK and international primary debt targeted at institutional and professional investors.
“London Stock Exchange is delighted to announce that its new International Securities Market is now live and welcomes the first bonds to begin trading on the platform,” said Nikhil Rathi, CEO of London Stock Exchange.
“The International Securities Market will provide UK and international fixed income issuers an additional efficient London listing venue, giving them access to the City’s deep pool of global capital and an international investor base,” he said. “In particular, we are honoured to welcome the support of Piyush Goyal, India’s Minister of State for Power, Coal and Renewable Energy, for our new market.
London Stock Exchange is the global home for Masala bonds raising over 5 billion dollars for supranational, municipal and private company institutions on its markets,” he added.
Kulamani Biswal, director (finance) at NTPC, said the listing of NTPC Masala Bonds on ISM as the “maiden issue” on the market marks the growing cooperation between NTPC and LSE.
“To NTPC and other issuers from India and across the globe, this provides an opportunity to access quality investors for meeting our financing needs. The tremendous response to NTPC Masala Bonds enthuses us to look at offshore funds as a regular source of financing our Capex needs,” he said.
The London Stock Exchange claims to be among the world’s most international capital markets, with around 70 per cent of all bond secondary trading activity conducted out of London. “As such issuers on ISM have access to one of the deepest pools of global capital. ISM has been designed to meet the demands of issuers and investors to improve the effectiveness and competitiveness of the UK primary debt markets providing greater choice for a variety of fixed income issuers,” LSE said in a statement.
Virgin Money’s existing issue of AT1 capital securities, issued in November last year and already listed on other markets, will also be admitted to trading on the ISM.
Jayne-Anne Gadhia, CEO at Virgin Money, said: “The new market will improve the competitiveness of UK primary debt markets and support the requirements and demands of issuers and investors alike”. “Additional choice for debt issuers should attract future issuance and provide an efficient, broader and deeper market in the UK,” Gadhia said
NTPC is India’s largest energy conglomerate with roots planted way back in 1975 to accelerate power development in India. Since then it has established itself as the dominant power major with presence in the entire value chain of the power generation business. From fossil fuels it has forayed into generating electricity via hydro, nuclear and renewable energy sources.
The total installed capacity of NTPC is 45,548 MW (including JVs) with 18 coal-based and seven gas-based stations. The PSU has set a target to have an installed power generating capacity of 1,28,000 MW by the year 2032. The capacity will have a diversified fuel mix comprising 56 percent coal, 16 percent gas, 11 percent nuclear and 17 percent renewable energy sources including hydro. By 2032, non fossil fuel based generation capacity shall make up nearly 28 percent of NTPC’s portfolio.
Posted by PSU revival at 9:00 AM