Thanks to Guj polls, oil PSUs not to hike cooking gas price in December 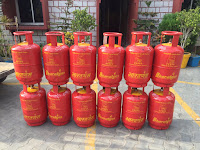 IF YOU are tired of all the mud-slinging and war of words between top politicians in these days, wait! There is a flip side of it as well. After hiking cooking gas LPG price by Rs. 76.5 in 19 installments in 17 months, national oil companies skipped the monthly revision in rates this month ahead of elections in Gujarat. State-owned Indian Oil Corp (IOC), Bharat Petroleum Corp Ltd (BPCL) and Hindustan Petroleum Corp Ltd (HPCL) have been since July last year raising price of LPG on 1st of every month with a view to...
eliminating government subsidies on the fuel by 2018. The oil companies, however, skipped the hike this month. "Yes it is true that we have not done a revision in subsidised LPG price this month," a top executive at one of the three retailers was quoted as telling a news agency. Asked if the government had asked the oil companies to skip the monthly revision, the official refused comments. The price of subsidised LPG was last raised by Rs. 4.50 per cylinder on November 1 to Rs. 495.69, according to a price notification issued by state-owned firms.
The government last year had asked state-run oil firms to raise prices every month to eliminate all the subsidies by March 2018. Since the implementation of the policy of monthly increases from July last year, subsidised LPG rates have gone up by Rs. 76.51 per cylinder. A 14.2-kg LPG cylinder was priced at Rs. 419.18 in June 2016. Every household is entitled to 12 cylinders of 14.2-kg each at subsidised rates in a year. Any requirement beyond that is to be purchased at market price.
To begin with, the hike in LPG rate was Rs. 2 per month which was raised to Rs. 3 from May this year. The November 1 hike in the LPG price was the sixth since the May 30 order of the oil ministry to raise rates by Rs. 4 per cylinder every month.
According to the Petroleum Planning and Analysis Cell (PPAC) of the Oil Ministry, there is a subsidy of Rs. 251.31 on every 14.2-kg subsidised LPG cylinder.
Incidentally, the non-subsidised or market priced LPG rates were raised by Rs. 5 per cylinder to Rs. 747 a bottle on December 1. Non-subsidised LPG rates have moved in tandem with their cost since December 2013.
There are as many as 18.11 crore customers of subsidised LPG in the country. These include over 3 crore poor women who were given free connections during the last one year under the Pradhan Mantri Ujjwala Yojna.
There are 2.66 crore users of non-subsidised cooking gas including those who gave up subsidy on call by Prime Minister Narendra Modi.
Posted by PSU revival at 9:30 AM