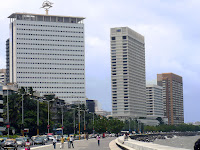 STATE-owned Jawaharlal Nehru Port Trust (JNPT), India’s biggest container gateway, has placed a more than Rs 1,000-crore bid to buy debt-ridden Air India’s iconic 23-storey tower located at Mumbai’s Marine Drive in Nariman Point, facing the Arabian Sea. JNPT’s bid was higher than that of state-run insurer, Life Insurance Corporation of India (LIC), the only other bidder to participate in the auction, a leading daily quoted a top government official as saying. The bid, though, is yet to be...
finalised because JNPT’s price quotation is below the reserve price set by the cash-strapped national carrier, and the transaction needs a no-objection certificate (NoC) from the Maharashtra government, which had leased the land for the tower many years ago.
“There were only two bids and JNPT was the highest bidder. The state government did not bid, after showing initial interest. The land is leased by the state government. So, legally, it requires a NoC from it… that’s the only thing, but they can’t bid now. Also, Air India had high expectations and had set a reserve price in the range of Rs 1,600 crore. JNPT’s bid is lower than that. Hence, Air India can take its own call or ask JNPT to raise the price,” the government official said, adding that Air India has kept the whole process confidential. JNPT, according to the government official, will have to take Public Investment Board (PIB) and Cabinet approval to buy the tower as the amount was more than Rs 1,000 crore. Only state governments and public sector undertakings were allowed to participate in the auction. The tower was built in 1974 and was designed by John Burgee of New York-based firm, Johnson and Burgee. It was the corporate headquarters of Air India till 2013, when it shifted base to New Delhi following a 2007 merger with Indian Airlines, another state-owned company that carried passengers on domestic routes. Air India revamped its logo after the merger, replacing the ‘Centaur’ with a red coloured flying swan with the 'Konark Chakra' in orange placed inside it, which now sits on top of the building. An earlier plan to sell the tower to JNPT without a tender was called off to avoid allegations of irregularities. The move to sell the 2,20,000 square feet building comes after a plan to privatise the loss-making carrier fell through last year for lack of bidder interest, forcing the government to abandon the move, with the next general election in May. The sale of the tower is expected to give a much-needed liquidity boost to Air India, while ensuring that the iconic building remains in government hands. The airline has identified residential and commercial properties for sale in at least 16 cities. Air India posted a standalone net loss of Rs 5,337 crore in FY18, compared to a loss of Rs 6,281 crore in FY17. At the end of the last financial year, it had Rs 21,955 crore in short-term borrowings and Rs 30,227 in long-term loans.
Posted by PSU revival at 8:30 AM