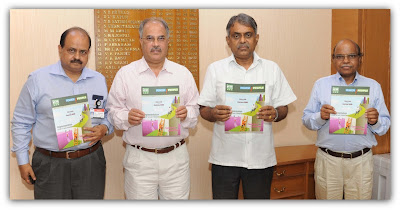 Power HR Forum, a professional body consisting of power sector public enterprises such as NHPC, REC, NTPC etc. has come out with the July edition of Power People, a quarterly Journal of the Forum. The edition was formally released by new power secretary PK Sinha in New Delhi on Thursday. Human Resources heads of power PSEs are the members of the...
Power HR Forum whereas CMDs are its patrons and power secretary is its chief patron. The Forum has been “studying, reviewing and recommending personnel policies, procedures and guidelines for sustainable development of human capital in the power sector”, a statement issued by the ministry of power on Thursday said. RS Mina, director (personnel) of NHPC is the Forum's president whereas Director, HR of NTPC UP Pani is its vice-president. Vinod Behari, executive director (HR) of REC is its honorary secretary. All of them attended the release function and apprised secretary Sinha of the activities and the vision of the Forum.
Posted by IPS at 11:10 AM