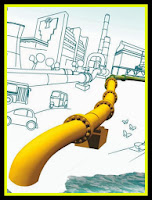 INDIA'S leading public sector enterprise Gas Authority of India Limited (GAIL) will set up a 'Green Corridor' comprising a natural gas highway from Jalandhar in Punjab to Bangalore in Karnataka. This was disclosed by GAIL chairman-cum-managing director (CMD) BC Tripathi on Monday during the pre-launch of ANGVA-2013, a three-day International Conference and exhibition, in New Delhi. The corridor, he said, aims at...
providing opportunities to inland transportation to operate on natural gas by extending reach of CNG beyond cities. The proposed corridor will pass through and benefit eight states: Karnataka, Maharashtra, Madhya Pradesh, Uttar Pradesh, Rajasthan, Delhi, Haryana and Punjab.
The proposed green corridor of natural gas pipeline will add to the current 13,000-km-long gas pipeline. Still, the pipeline density in the country is yet to cover vast areas leaving a significant market segment out of reach for the natural gas market.
The CMD said the proposed corridor aims to establish the natural gas highway in the country. The refuelling facilities across the green highway will boost up long haul transporters in adopting natural gas as more and more gas stations will come up. The gas pipelines from Bangalore to Jalandhar will encourage transforming inland transportation to operate on natural gas vehicles. This in the process will expand the reach of CNG beyond urban pockets.
Tripathi further said that operational LNG re-gasification terminals at Hazira, Dahej, Dabhol and Kochi along with transportation pipeline network is paving way to fuel the natural gas vehicles through a pool of domestic and RLNG mix. He suggested that gas companies need to create the CNG refuelling infrastructure in a coordinated manner to provide CNG outlets along the highways while car makers are required to come forward with long haul natural gas to ply along highways.
In a related development, giving a much needed relief to GAIL, the Madras High Court on Monday gave the green signal for implementation of the PSU’s natural gas pipeline project that will pass through seven districts in the State.
GAIL had challenged a state government’s letter of April this year and now court said there was overwhelming public interest in favour of the project. As the project would ultimately be connected with the natural gas grid, it would benefit the state to a very large extent, the court said. The pipeline is to be laid from Kochi terminal to Bangalore. About 300 km is to pass through Coimbatore, Tirupur, Salem, Erode, Namakkal, Dharmapuri and Krishnagiri districts.
GAIL had already invested Rs 685 crore in Tamil Nadu out of the total project cost of about Rs 3,000 crore.
Posted by PSU revival at 8:15 AM