Beyond Christmas: How PSUs turn Santa Claus for the government for 365 days a year 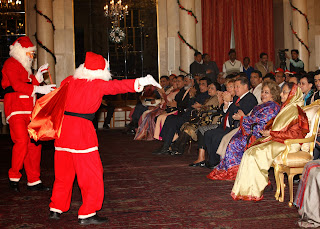 THE Central public sector enterprises (CPSEs) have often been turning out to be a milking cow for the government all throughout the year. Whenever the government falls short of cash or finds it difficult to boost its GDP, it often falls back upon the CPSEs especially the cash-rich ones for churning out "gifts" like the Santa Claus. It does not matter whether it's X-mas time or not, CPSEs turns out to be a Santa both for the government and its employees. Read on:
In fact, public sector companies play a vital role in so far as capex (capital expenditure) goes. Cash-rich PSUs are expected to pump in about Rs 1.4 lakh crore as capex this fiscal. The target for the first half of the fiscal was about Rs 50,000 crore and of this about 96 percent was already invested. No doubt, PSU capex targets are on track thus far. In fact, a slowdown was seen in capex by PSUs last year and now, the finance ministry has seen this as a signal of uptick in growth. So here PSUs will be the Santa for the government. As on November 30, 2013, of the total of 260 CPSEs and subsidiaries of CPSEs, 50 were listed in the bourses. As many as 46 of these were listed at BSE, which constituted 15 percent of the total market capitalisation of 5,116 companies listed at BSE. In addition, 28 public sector banks (PSBs) accounted for another four percent of the total market capitalisation in BSE. Thus, all PSUs together constituted 18.7 percent of the total market captalisation at BSE or Rs 12.72 lakh crore.
Secondly, PSUs have always on a hiring mode. So for tens of thousands of aspiring job seekers, especially the youngsters, PSUs are the Santa for 365 days. There is good news for those looking for jobs in PSUs, one of the best places to work. PSUs such as BPCL, NTPC, GAIL, BHEL are hiring and will be paying handsome salaries along with attractive perks. Major PSUs will be hiring in the first part of 2014 and thousands of technical as well as administrative jobs will be up for grabs in some key Maharatna and Miniratna companies. Public sector banks such as SBI, PNB are also in the hiring mode notwithstanding the fact that most central government departments have put fresh recruitment on hold for quite some time.
Thirdly, for the government, PSUs turn Santa Claus in so far as the targets of disinvestment are concerned. The government is banking on the cash-rich PSUs to achieve its disinvestment target for the current fiscal year set in the Budget. The government has appealed to the PSUs to pay out generously to help bridge the budgetary shortfall. The life-size dividend cheques CMDs of PSUs present to ministers every year are set to get bigger by the end of the current fiscal year.
In October, finance minister P Chidambaram asked the profit-making central public sector enterprises (CPSEs) like ONGC, Indian Oil, SAIL, NTPC, Coal India and GAIL India to pay more dividends from the state-owned companies this year to make up the disinvestment shortfall and thereby rein in the fiscal deficit.
Fourthly, public sector undertakings play a key role in financing the planned development of the country. They have significantly contributed to the Central exchequer in the form of interest and various taxes, to name a few. Besides, PSUs show an increasing trend in the generation of internal resources. In the total capital formation of the country, more than 50 percent is contributed by the public sector.
Now, let's have a quick look on these PSUs. As of March 31, 2012, there were as many as 260 CPSEs (excluding seven insurance companies). The number of profit-making CPSEs increased steadily from 143 CPSEs in 2004-05 to 160 CPSEs in 2007-08. The number of profit-making CPSEs as on 2011-12 stand at 161 with a total profit of Rs 125,116 crore.
Fifthly, Corporate social responsibility (CSR) is an area where the PSUs are the Santa. Under the new Companies law, all profitable companies with a sizeable business will have to spend every year at least two percent of three-year average profit on CSR work.
The government is expecting an annual CSR spending of Rs 15,000-20,000 crore by India Inc every year. The Cente has asked cash-rich PSUs to see the new CSR law as an investment opportunity to create a better work environment. PSUs are expected to spend on various projects such as environment, skill development, water, sanitation etc and in the way employees of these PSUs will alos be benefited.
NTPC had allocated an amount of Rs 72 crore for CSR activities for the year 2010-11. The expenditure incurred by NTPC during 2010-11 for various CSR activities was Rs 72.21 crore. ONGC has a budget of Rs 500 crore a year for CSR activities.
Posted by PSU revival at 11:08 AM