Dealing with disasters: 30 PSUs to join hands with NDRF 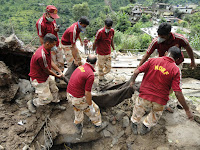 THE NDRF, country's top disaster management agency, has joined hands with about 30 PSUs in order to develop mutual understanding and enhance capabilities to jointly tackle man-made or natural emergencies.
Recently, a coordination meeting was held in New Delhi between the National Disaster Response Force (NDRF) and prominent Public Sector Undertakings like ONGC, GAIL, Air India and those in the mining and shipping...
and heavy industries sector.
Over 40 senior officials from these PSUs took part in the maiden meeting held here on October 23.
"In order to solemnise the concept of empowerment and capacity building in the respective field of their expertise and geographical locations, we proposed that the force can really contribute in capacity building by strengthening the skills, competencies and abilities of the workforce of the PSUs. The effort is to build a good synergy between both the organisations," NDRF Director General O P Singh told news agency PTI.
The initiative, a first, will ensure that in case of any emergency or disaster the two sides can come together and act as one strong unit and also ensure that in case of small or mid-level exigencies these units can function as first responders till the NDRF arrives on the scene.
The NDRF has proposed to these large establishments that it could extend its skill modules like on tackling nuclear, biological and chemical disasters to train their personnel.
The DG said despite possessing excellent resources and skills, these organizations have been grossly underutilised when it comes to making effective response to disasters of all kinds.
Two major natural catastrophe namely Orissa Super Cyclone (1999) and Gujarat Earthquake (2001) brought about the realization of the need of having a specialist response mechanism at National Level to effectively respond to disasters.
Later statutory provisions were laid out for constitution of National Disaster Response Force (NDRF) for the purpose of specialized response to natural and man-made disasters. Accordingly, in 2006 NDRF was constituted with 08 Bns (02 Bn each from BSF, CRPF, ITBP and CISF). As on date NDRF is having strength of 10 Bns. Each NDRF Bn consists of 1149 personnel. Union cabinet has also approved the conversion/up-gradation of 02 Bns from SSB. The force is gradually emerging as the most visible and vibrant multi–disciplinary, multi-skilled, high-tech, standalone force capable of dealing with all types of natural and man-made disasters.
NDRF has proved its importance in achieving this vision by highly skilled rescue and relief operations, regular and intensive training and re-training, capacity building and familiarization exercises within the area of responsibility of respective NDRF Bns, carrying out mock drills and joint exercises with the various stakeholders.
Posted by PSU revival at 10:26 AM