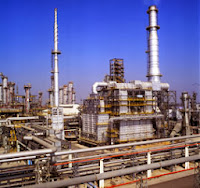 STATE-run oil marketing PSUs Indian Oil Corp (IOC), Bharat Petroleum Corp (BPCL) and Hindustan Petroleum Corp Limited (HPCL) on December 7 signed an agreement to build India's biggest oil refinery at a cost of $30 billion. The project for the 60-million tonne per annum (MTPA) refinery in Maharashtra has Indian Oil as the consortium leader. Indian Oil will have a 50 per cent stake in the project. Bharat Petroleum and Hindustan Petroleum will have 25 per cent each. The consortium...
agreement was signed on the sidelines of the Petrotech 2016 hydrocarbons conference here in the presence of Petroleum Minister Dharmendra Pradhan and Union Ministers Nitin Gadkari, Piyush Goyal and Anil Dave. Two to three sites on the Maharashtra coast are being explored for the refinery and mega petrochemical complex that will be set up in two phases.
The Phase-1 capacity will be 40 million tonnes (MT) together with an aromatic complex, naphtha cracker unit and a polymer complex. This will cost between Rs 1.2-1.5 lakh crore and will come up in 5-6 years from the date of land acquisition.
The second phase, involving a 20 MT refinery, will cost Rs 50,000-60,000 crore. The Mukesh Ambani-led Reliance Industries currently operates India's biggest refinery in Jamnagar in Gujarat, which has a capacity of 33 MT.
Earlier in January a top IOC official said that the PSU was looking at west coast for a refinery as catering to customers in west and south was difficult with our refineries mostly in the north. HPCL has also been looking at a bigger refinery because of constraints it faces at the Mumbai unit. The PSUs are scouting for a suitable location on the west coast "very large refinery". "The concept has gone beyond thinking stage and is now under conception," the official said.
15 million tonnes a year is the biggest refinery any public sector unit has set up in one stage. IOC recently started its 15 million tonnes unit at Paradip in Odisha.
Till now, Reliance Industries has built the biggest refinery in India. It built its first refinery at Jamnagar in Gujarat with a capacity of 27 million tonnes, which was subsequently expanded to 33 million tonnes.
It has built another unit adjacent to it for exports, with a capacity of 29 million tonnes. The refinery being planned by the PSUs will cost Rs 2,500 crore per million tonnes. The refinery will also be accompanied by a petrochemical complex. The location in the west coast will provide the unit a natural advantage of easily sourcing crude oil from the Middle East and Africa. IOC has six refineries with a total capacity of 54.20 million tonnes. It also has subsidiary refineries with 11.50 million tonnes capacity. IOC is India's largest commercial enterprise, with a sales turnover of Rs. 450,756 crore ($73.7 billion) and profits of Rs. 5,273 crore for the year 2014-15.
Meanwhile, state-owned explorer Oil and Natural Gas Corp. has hired global oilfield service providers Halliburton Company and Schlumberger Ltd to increase output from its producing fields. IOC has tied up with Pune-based Praj Industries Ltd. for a 33 million litre a year biomass to ethanol plant at Dahej in Gujarat and a similar one at Panipat in Haryana. Bharat Petroleum will set up similar plants at Bina in Madhya Pradesh and at Bargarh in Odisha, while Hindustan Petroleum Corp. will set up a similar facility at Bhatinda in Punjab.
Posted by PSU revival at 9:00 AM