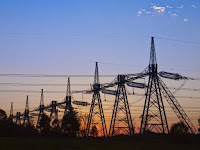 POWER Grid Corporation of India (PGCIL) will be spending Rs 91,000 cr in three years placing a bet on turnaround of the distribution sector and prospective demand from states. “In intra-state transmission, Rs 1.5 lakh crore worth of work is expected. The positive impact of UDAY (the scheme for the distribution sector) and the Centre’s various reform programmes...
in states would kick-start investment in sub-transmission and distribution,” the government-owned company said in a presentation to its investors after the March quarter results.
For the coming three years, PGCIL would cumulatively invest Rs 91,000 crore in several projects, said its executives. It has ongoing projects of Rs 1.05 lakh crore and Rs 25,000 crore in the pipeline. The projected investment includes the Green Corridors project, the ambitious alternate transmission network for renewable energy.
PGCIL currently operates close to 14,000 circuit km of transmission lines and 220 substations with transformation capacity of 292,000 MVA.
UDAY or Ujwal Discoms Assurance Yojana is a debt-restructuring programme for state government-owned power distribution companies (discoms) to turn around the financial and operational performance. Most states would have to improve their “last mile” transmission and distribution network to bring down technical and commercial losses. Grid expansion and strengthening are part of the reform.
The transmission sector is likely to see Rs 2.6 lakh crore of investment by 2022, with close to 106,000 circuit km of transmission lines and 292,000 MVA of transformational capacity (of substations). If the envisaged Rs 2.6 lakh crore, Rs 1 lakh crore would be invested by PGCIL and the rest awarded to private entities through ‘tariff based competitive bidding (TBCB).
Apart from conventional power projects, the transmission major is expecting opportunities from new areas such as ultra-mega solar parks, electric vehicle charging infrastructure, smart grids and battery storage for renewable energy.
“Among the major driving forces for growth of power transmission would be a continued thrust on seamless and flexible grid interconnection and renewables for energy security & climate change, coupled with improving financial health of discoms. Development of smart cities, growth of the railways network and dedicated freight corridors, coupled with Digital India initiatives, would push power demand,” the company said. Close to 24,000 circuit km of the Indian Railways network needs to be electrified by 2021.
The two other divisions of PGCIL, telecom infrastructure and consultancy, are also slated to see healthy growth. Company executives said they'd leverage the existing telecom infrastructure and run these on cleaner energy.
Power Grid Corp’s standalone net profit jumped 22 per cent year-on-year to Rs 1,916.36 crore in the quarter ended on March 31, 2017.
The PSU had reported a standalone net profit of Rs 1,568.58 crore in the quarter ended on March 31, 2016.
Its total income rose to Rs 7,054.45 crore in the fourth quarter of 2016-17 from Rs 5,984.49 crore in the year ago period, Power Grid Corp said in BSE filing.
The company’s standalone net profit increased to Rs 7,520.15 crore in 2016-17 from Rs 5,948.50 crore in 2015-16.
Total income also rose to Rs 26,581.41 crore in 2016-17 from Rs 21,243.30 crore in 2015-16.
The consolidated profit for 2016-17 was Rs 7,450.73 crore compared to Rs 5,958.61 crore in the previous fiscal.
The board also approved non-sovereign loan assistance from Asian Development Bank of $500 million for Green Energy Corridor and Grid Strengthening Projects.
The board also approved investment of Rs 445.89 crore for transmission system for Tumkur Ultra Mega Solar Park. It also gave approval for purchase of security equipment for Rs 199.79 crore
The Navratna PSU, the central transmission utility (CTU) of the country under ministry of power figures among the largest power transmission utilities in the world. PGCIL is playing a vital role in the growth of Indian power sector by developing a robust integrated national grid and associating in the flagship programme of the government to provide power for all. The PSU owns and operates about 113,688 ckt kms of transmission lines and has 189 sub-stations.
Posted by PSU revival at 9:30 AM