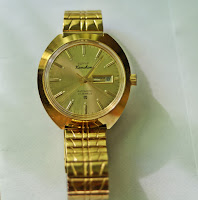 CHANGE is perhaps the only constant thing is life! So is with the residents of Tumakuru since the city is all set to bid adieu to the factory of HMT Watches Ltd. and, in its stead, welcome the Indian Space Research Organisation (ISRO).
On July 14, the 110-acre plot of land belonging to the defunct factory, which was closed on April 30, 2016, will be handed over to ISRO.
“The land of HMT was registered in...
the name of ISRO 15 days ago. We are organising a programme to formally hand over the HMT land to ISRO on Saturday,” said Member of Parliament, S.P. Muddahanume Gowda.
Former employees of the defunct unit will participate in the ceremony, repoted the Hindu.
With a workforce of 326, the factory — set up around 40 years ago — was the last of HMT’s functional watch-making units to down its shutters. It had the capacity to produce more than 20,000 watches a month, but by 2016, it was producing only 4,000.
The report quoting officials, said between 1978 and 2014, it had produced a total of 3.95 crore watches, worth Rs. 1,353 crore. However, at the time of closing, it was taking only institutional orders.
Muddahanume Gowda acknowledged the factory’s contribution to the economic, social and educational development of Tumakuru district in its heydays. “Hence, on this occasion, we will express our gratitude to HMT, and also to the late former MP K. Lakkappa who was responsible for bringing HMT to Tumakuru 40 years ago,” he said.
He expressed optimism on the potential of ISRO to pick up where HMT left off. “ISRO will help to create more than 4,000 jobs. It will help in the overall growth of Tumakuru district,” the MP added
On July 14, Deputy Chief Minister Dr. G. Parameshwara will inaugurate the program, which will be attended by ministers S.R. Srinivas and Venkataramanappa, senior IAS officer in the Department of Space S. Kumaraswamy and senior HMT officials.
Posted by PSU revival at 9:24 AM