GAIL to stay one entity but will lose petrochem business: Petroleum Minister 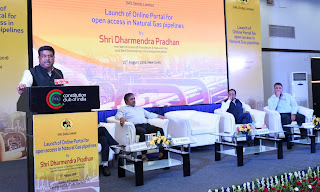 UNION Petroleum Minister Dharmendra Pradhan on August 27 ruled out separating GAIL's gas transportation and marketing businesses but said the state-owned gas utility should divest its non-core petrochemical business at a good price. To resolve the conflict arising out of the same entity owning the two jobs, GAIL will bifurcate the accounts and give outside parties access to its vast pipeline network.
"GAIL board has considered the issue and has assured that it will...
operate the two businesses of gas transportation and marketing independently and autonomously," Pradhan said.
He was speaking at the launch of the company's online portal for common carrier capacity booking by marketing entities and consumers for transportation of natural gas through its pipelines.
Splitting GAIL "is not on the government's agenda," he said adding his ministry wants efficiency in operations of the company. Pradhan said GAIL was formed with the objective of building pipelines and over the past three decades has also become major marketer of gas.
Pipelines are crucial for taking natural gas to consumers across the country. Currently, the pipelines are concentrated in western and northern part of the country only.
"GAIL has to concentrate on pipeline laying. It is unacceptable that they neglect pipeline for marketing and petrochemicals," he said. "It is unacceptable that they dress up their balance sheet with margins earned from gas marketing and petrochemicals."
Later talking to reporters, he said the board of the Maharatna PSU has deliberated on the issue and agreed to separate balance sheets of the two businesses as also operating the pipelines on transparent basis by giving third party access.
Petrochemicals is "non-core business" of GAIL, he said. "GAIL should exit petrochemical business when they get a good price." GAIL, he said, has to perform and fulfil the aspirations of taking gas to every nook and corner of the country.
There is an estimated 30 million standard cubic meters per day of natural gas that cannot be produced now because of lack of pipeline infrastructure to take the fuel to the consumers, he said.
India's current domestic natural gas production is around 70 mmscmd. Pradhan said GAIL will separate balance sheets of marketing and transportation business.
This would mean that if GAIL were to sell gas to a consumer, its marketing division will have to enter into an agreement with the unit owning and operating the pipelines on the same terms and tariffs as being offered to outside third parties.
The oil ministry has been for last few months considering bifurcating GAIL's businesses to resolve the conflict of the same entity doing both the jobs. One of the reasons for this was some industry players alleging that GAIL was not giving them access to its 11,000-kilometer pipeline network to transport their gas. GAIL Chairman and Managing Director B C Tripathi said GAIL gave first open access to its pipelines in 2004 when four companies booked capacities. Today, there are 115 consumers using GAIL pipelines, he said. The ministry had in January stated that it is considering to split GAIL into two - one for laying pipelines and the other for marketing and petrochemicals - to encourage more transparency between the two operations. This is because it believed that all entities authorised to lay natural gas pipelines including GAIL have to "provide mandatory open access of its gas pipeline infrastructure on common carrier principle at the non-discriminatory basis, at transportation rates determined by the Petroleum and Natural Gas Regulatory Board (PNGRB)". Citing a 2006 policy, it stated that in the long run with the maturity of gas markets, the authorised entities should have transportation of natural gas as their sole business activity and not have interest in gas marketing or city gas distribution network.
Posted by PSU revival at 9:33 AM