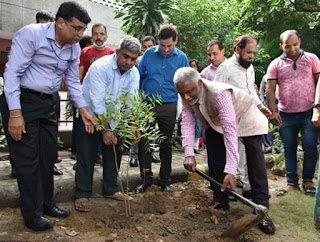 SHARES of Housing & Urban Development Corporation (HUDCO) jumped more than 14 percent in the opening trade on September 6 on the back of robust numbers declared by the company for the quarter ended June 2018 (Q1FY19).
It has touched an intraday high of Rs 63.80 and an intraday low of Rs 59.75.
The company's Q1 profit jumped 105 percent...
to Rs 333.4 crore versus Rs 162.4 crore in the same quarter last fiscal.
Revenue rose 70 percent to Rs 1,530.9 crore versus Rs 901 crore.
Earlier last month, the government has initiated the process of divesting its stake in three Central PSUs — HUDCO, along with NBCC, and North Eastern Electric Power Corporation Ltd (NEEPCO).
Govt is mulling divesting 10 per cent stake each in NBCC and HUDCO, and 25 per cent in NEEPCO. Divestment will be through ‘Offer for Sale’ (OFS) route in NBCC and HUDCO; while there will be an Initial Public Offer (IPO) for NEEPCO.
NBCC and HUDCO are already listed on the stock exchanges. Stake sale in these two companies could fetch over Rs 2,400 crore.
In HUDCO, the Government has 89.81 per cent stake. After divesting over 20 crore shares, its stake will come down to 79.81 per cent. Still, it would be required to sell around 5 per cent to be compliant with the minimum public shareholding norms as prescribed by the SEBI. The PSU is engaged in providing loans for housing and urban infrastructure projects. The PSU earned a net profit of Rs 222.52 crore on a revenue of Rs 1,169.66 crore at the end of last fiscal.
The government owns 73.75 per cent in NBCC and is considering selling 1.80 crore shares. Post divestment, the government stake will come down to 63.75 per cent. The ‘Navratna’ CPSE is one of the continuously-making profit companies. It has more than Rs 80,000 crore book in hand till March. The company has registered consolidated profit of Rs 372.14 crore while its consolidated total income surged to Rs 709,5.91 crore in 2017-18.
NEEPCO is 100 per cent owned by the government. The company was incorporated in 1976 to plan, investigate, design, construct, generate, operate and maintain power stations in the North Eastern Region of India. It generates about 40 per cent energy requirement of North-Eastern States with the help of 6 hydro, 3 thermal and 1 solar power stations with a combined installed capacity of 1347 MW. It has 2 power projects under development which include 110 MW Pare HEP and 600 MW Kameng HEP which is scheduled for commissioning this fiscal.
The Government has budgeted Rs 80,000 crore to be mobilised through disinvestment. Till date, it has got over Rs 9,200 crore through IPOs of Mishra Dhatu Nigam Ltd (MIDHANI) and RITES Ltd and through Exchange Traded Fund (ETF) Bharat 22.
HUDCO's Swachhata Pakhwada
The Swachhata Pakhwada kick-started on 16th August 2018 by Dr. M Ravi Kanth, CMD, HUDCO by administering the swachhata pledge to all HUDCO employees.
HUDCO adopted a Government Primary School in Sarai Kale Khan, where CMD HUDCO planted a sapling and addressed the students for keeping their surroundings clean. HUDCO employees volunteered to clean the school premises and also presented a street play to the children on the same theme. Several activities were organized during the Pakhwada to highlight the importance of Swachhata in everyday life.
A painting competition for HUDCO employees was organized on the subject and a day was dedicated for cleaning the office premises by all employees. A Nukkad Natak by professionals was also organized by HUDCO at the India Habitat Centre to spread the message of Swachh Bharat Mission for all the organizations housed at the Habitat Centre.
Posted by PSU revival at 9:30 AM