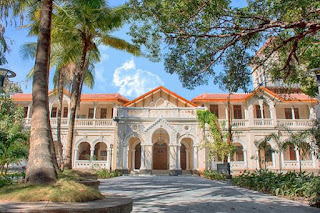 PRIME Minister Narendra Modi will inaugurate the National Museum of Indian Cinema (NMIC) in Mumbai on January 19. The state-of-the-art Museum, built by PSU NBCC, at a cost of Rs. 140.61 crore, aims to take its visitors through an absorbing journey of over a century of Indian cinema in a story telling mode with the help of visuals, graphics, artifacts, interactive exhibits and multimedia expositions, the government said in a statement.
Founded on an amalgamation of technology and amenities in a Victorian structure, constructed and refurbished by state-owned Navratna PSU, NBCC, under the Ministry of Housing and Urban Affairs (MoHUA), the NMIC will be a treat for historians, tourists and...
film buffs from across the world.
“Considering such factors, adoption of unconventional method of construction was the way ahead, which led to the incorporation of composite construction which offered the combined benefits of concrete and steel. In NMIC, pre-fabricated structural steel and deck sheets are the two components that are combined together for forming a composite structure. An engineering marvel, the NMIC project is NBCC’s first ever steel building structure,” NBCC said in a statement.
Dr. Anoop Kumar Mittal, CMD, NBCC said, “We are immensely proud to construct and restore an edifice that will narrate the rich history of Indian Cinema. Completing a project that lies at the heart of a congested city, without compromising on the quality of construction, speaks volumes of NBCC’s capabilities and engineering expertise. We are grateful to the Ministry of Information & Broadcasting for letting us be a partner in showcasing India’s rich cinematic legacy to the public.”
In an endeavour to make the entire complex a potential ‘film hub’, the Victorian-Gothic era complex, which once drew luminaries to its musical soirées and cultural gatherings, is now well-equipped with modern amenities and facilities, including expansive auditoriums. In addition to this, the complex houses a multi-purpose hall that has been designed to be used as a movie preview theatre and for social functions, conferences and other seminars.
Set in an elegant 19th-century heritage bungalow in South Mumbai, the project involved refurbishing the historic Gulshan Mahal and constructing the state-of-the-art NMIC building that has 5 floors and two Mezzanine floors accounting for a total built up area of 12,000 sq metres.
“NBCC was able to complete the project despite facing challenges like the locality being a congested one, with barely any working space available. Apart from the space constraint, another major obstruction was restricted working hours along with regulated sound decibels. The movement and entry for the heavy vehicles was also restricted during day time,” NBCC statement further said.
The creation of the Museum has been guided by the Museum Advisory Committee headed by Shyam Benegal. An innovation Committee headed by Prasoon Joshi was also constituted to provide an upgrade to NMIC. The Museum is housed in two buildings – the New Museum Building and the 19th century historic palace Gulshan Mahal – in the Films Division campus in Mumbai.
The New Museum Building has four Exhibition Halls which encapsulate:
Gandhi & Cinema: it not only depicts the movies made on the life Mahatma Gandhi but also showcases the deep impact his life had on cinema.
Children’s Film Studio:  it gives visitors, particularly children, an opportunity to explore the science, technology and art behind filmmaking. It offers hands on experience on various facets associated with making cinema like camera, light, shooting, experience of acting, etc. – presented in an interactive format. The exhibits displayed include chroma studio, immersive experience zone, stop-motion animation studio, virtual makeover studio, etc.
Technology, creativity & Indian cinema: it showcases the creative use of technology by Indian film makers over the years to produce cinematographic impact on the silver screen.
Cinema across India: it showcases the charismatic kaleidoscopic presence of the vibrant cinematographic culture across India.
Gulshan Mahal is an ASI Grade-II Heritage Structure which has been restored as part of the NMIC project. The displays present here showcase the journey of over a hundred years of Indian cinema.  It is divided into 9 sections viz. The Origin of Cinema, Cinema comes to India, Indian Silent Film, Advent of Sound, The Studio Era, The impact of World War II, Creative Resonance, new wave and Beyond and Regional Cinema.
Posted by PSU revival at 11:10 AM