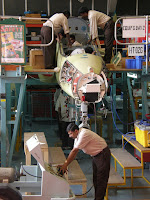 STATE-owned Hindustan Aeronautics Ltd (HAL) on February 11 reported a 17.02 percent decline in net profit to Rs 455.19 crore in the third quarter ended December 2018.
An Indian Air Force (IAF) light combat aircraft "Tejas" performs during the Indian Air Force Day celebrations at the Hindon Air Force Station...
on the the outskirts of New Delhi on 8 October. ReutersFile image of light combat aircraft Tejas.
HAL had reported a net profit of Rs 548.59 crore in the October-December quarter of the previous fiscal.
In a filing on the exchanges, HAL said a fraud involving misappropriation of funds by a company official in collusion with six contractors has been noticed by the management and referred to the vigilance department for further investigations.
"The vigilance department based on the investigations has lodged FIR with Central Bureau of Investigation (CBI), Bhubaneshwar. An amount of Rs 1,876 lakh has been provisionally assessed as fraudulent payments made to contractors during the period from December 2013 to September 2018, and reported in the FIR with CBI," the company said.
It said the matter is under investigation by CBI. HAL's total income from operations stood at Rs 4,482.83 crore during the period, compared with Rs 4,462.92 crore in the corresponding year-ago period.
Its total expenses rose to Rs 3,799.33 crore in the December 2018 quarter, against Rs 3,618.14 crore a year ago.
HAL, under the Ministry of Defence, is a Navratna aerospace and defence PSU based in Bangalore.
The government-owned corporation is primarily involved in the operations of the aerospace industry. These include manufacturing and assembly of aircraft, navigation and related communication equipment and airports operation. HAL also built the first military aircraft in South Asia. One of the largest aerospace companies in Asia, HAL has annual turnover of over US dollar 2 billion. More than 40 per cent of HAL's revenues come from international deals to manufacture aircraft engines, spare parts, and other aircraft materials.
Posted by PSU revival at 9:30 AM