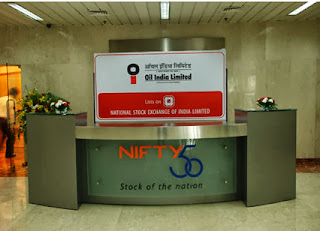 LAST Saturday, top brass of Navratna company, Oil India Limited (OIL), flew down to North-East India’s oil township of Duliajan. Located in a lush green environment, Duliajan, the OIL’s field headquarters, witnessed its 54th annual general meeting. In his address, OIL CMD SK Srivastava had the following announcements to make:
1. The turnover of the company stood at Rs 9,947.57 crore in 2012-13, as against Rs 9,863.23 crore a year ago, registering the highest turnover in the history of the company.
2. The profit after tax (PAT) in FY13 touched a new peak of Rs 3,589.34 crore, a rise of 4.13% over the previous year.
3. OIL has declared dividend at 300%.
4. OIL’s net worth is now Rs 19,212 crore, as against Rs 17,721 crore a year ago.
5. Profitability of the company for 2012-13 was impacted by Rs 4,481.74 crore, as it had to provide subsidy discounts to the tune of Rs 7,892.17 crore to oil marketing companies to compensate their under recoveries.
6. The company’s annual gas production in FY 2012-13 recorded the highest ever total of 2639.21 MMSCM.
7. Its production of crude oil and condensate (including JV share) was however lower at 3.701 MMT compared to a year ago. A number of “unforeseen reasons” caused the downfall, said the company.
8. OIL had a substantial contribution both to the state and Central exchequers. In terms of cess, royalty, sales tax, etc., the contribution to Assam government’s exchequer in FY 2012-13 was Rs 1,849.89 crore and that to the Central Government was Rs 4874.79 crore.
9. OIL’s audited annual accounts have “nil” comments from the CAG for the eleventh year in a row.
10. So far as the NELP bidding is concerned, OIL now has 27 blocks, either alone or in JVs with other national or international companies. Out of those 12 blocks are operational.
11. OIL is now an international player. It has presence in eight countries. The OIL and Indian Oil Corporation Limited (IOCL), have jointly acquired 30% in Carrizo Oil & Gas Inc’s (“Carrizo”) liquid rich shale assets in the Denver-Julesburg basin in Colorado, USA. OIL has 20% of the total stake.
12. OIL has a wholly-owned subsidiary in Texas, USA. It’s called Oil India (USA) Inc.
13. In a major diversification plan, it has also made forays into unconventional energy segment. The OIL commissioned a 13.6 MW wind turbine plant at Ludhureva in Jaisalmer district of Rajasthan in 2011-12. The company then commissioned additional 54 MW wind power in Rajasthan during the financial year, 2012-13.
14. In 2012-13, it commissioned a 100-KW solar energy power project at Duliajan and one at Rajasthan’s Jaisalmer.
15. In the years to come, both wind power and solar power will be added to its portfolio in a big way. The company has announced that it would soon take up large wind and solar power projects.
Posted by IPS at 1:07 PM