Can HMT move ahead with time? 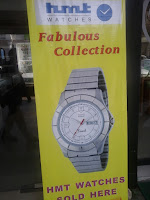 SURENDRA Sharma is pessimistic about the future of once iconic 'time keeper' of the nation. “The reason for their failure was, may be, HMT failed to move ahead with time. Technological up gradation was not done on time,” says Sharma whose shop in Cannaught Place used to be the distributor of HMT watches in the 70s and 80s.
As you cross Connaught Place, Sharma’s showroom will fancy your eyes with a display of some HMT watches. The display board says Fabulous Collection, attractive enough to...
draw any passerby’s attention.

Few months back when the last HMT showroom in Connaught Place was shut down due to plummeting losses, Sharma, an awardee of Present’s Medal for Meritorious Services, bought some watches and now are keeping in his Citizen showroom.
Sharma, who is in the business for decades, says it was an attempt to sell the time keeper of the nation to the youngsters. The response was good.
HMT was set up by the government in 1962 with help from Japan’s Citizen. HMT admirers included former Indian Prime Minister Indira Gandhi and Russian politician Leonid Brezhnev. In the 1970s and 80s, HMT watches and scooters used to be prized gifts and cherished status symbols at a time when household incomes were low.
Stiff competition from Indian rival Titan and the entry of foreign quartz watches after import restrictions were lifted in the 1980s and HMT’s failure to adapt to change led to falling sales, a slump from which the PSU never recovered.
But the government is also trying to bring the PSU back on track. Union heavy industries minister Anant Geete has said that his ministry is working out strategy to make HMT Machine Tools profitable once again. "During the UPA regime, only 13 units were in profit. Now, 17 are making profit. We are working towards making the remaining four -- HMT Machine Tools, Heavy Engineering Corporation, Hindustan Paper Corporation and NEPA --profit making," Geete said at an event organised by IEEMA. Indian Electrical and Electronics Manufacturers' Association (IEEMA), is a national representative organization of manufacturers of electrical, industrial electronics and allied equipment in India.
The once 'timekeeper of the Nation' will lay off 2,900 of its staff, including 1,091 from its twin-watch units and a bearing factory to turn around its fortunes with 1,600 blue collar workforce.
Earlier, the Centre decided in December to shut down the three loss-making HMT subsidiaries and merge the remaining two into a holding firm. A one-time voluntary retirement scheme, estimated at around Rs 25-55 lakh for each employee, was also being worked out.
Posted by PSU revival at 10:53 AM