Time out for HMT’s last unit in Tumakuru 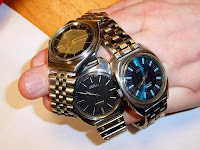 FOR tens of millions of laboring class May Day is a moment to celebrate the spirit of labour and work. But this year’s May Day was a bad day for the workers of Hindustan Machine Tools Watches Ltd, once regarded as the “timekeepers of the nation.” The PSU’s major watch manufacturing unit at Tumakuru stopped its operations from April 30.
As many as 179 employees here, with...
less than five years of service left, had opted for the voluntary retirement scheme (VRS) in January this year. The remaining 121 employees, who had eight to nine years of service left, too opted for VRS.
General Secretary of Tumakuru HMT Employees’ Union, K.N. Sathyanarayana, told a national daily that all the employees got their relieving orders after they punched out for the last time on Saturday evening. He said that they were getting VRS benefits as per the 2007 pay scale, which is an advantage to the employees as they were being paid according to the 1992 pay scale.
But their future time will remain uncertain.
Though there were several promises of reviving the HMT, none of them really took off and the iconic public sector factory is now shut forever.
HMT Watches Ltd was established in 1979 with 2,100 employees and with 22 assembly ancillary units. It was a profit making PSU till 1993. The Tumakuru unit, with 326 employees, was the only factory which was functional of the four units of the once-flourishing public sector enterprise
The PSU has a capacity to produce more than 20,000 watches per month. However, now, it was producing 3,000 to 4,000 watches. It had produced 3.95 crore watches, worth Rs. 1,353 crore, from 1978 to 2013-14. However, now, the factory was taking only institutional orders. The Tumakuru unit was manufacturing Lalit, Elegance, Sona, and Dipti series of watches.
Posted by PSU revival at 10:53 AM