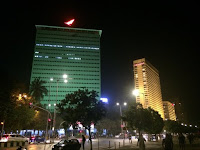 STATE-owned cash-rich Jawaharlal Nehru Port Trust (JNPT) has shown interest in buying out the Air India’s iconic 23-storey building at Mumbai’s Nariman Point with an eye to earn rental income by deploying its cash reserves of around Rs 4,700 crore.
The government has already set up an inter-ministerial panel of secretaries comprising of shipping and civil aviation secretaries to work out the modalities for the sale or government-to-government transfer of the property. The building has...
3 lakh sq feet built-up area and 17 floors of the building have been rented out. The move comes days after the government deferred the plan to sell 76 percent stake in Air India, citing the current economic conditions, and signals the intent to raise funds that could help cover a part of the ailing airline’s survival plan. The airline is saddled with loans of over Rs 50,000 crore which eats up its revenues in a highly-competitive market.
“JNPT will decide buying it based on the cost of the building and how reasonable the price is,” an official said. People in the know of the recent developments said the name of the building won’t be changed since it’s a landmark in the country’s financial capital.
The current rental income is around Rs 100 crore. “The new owner will have about 60 years of the lease of this building and hence can be a better investment proposition for the government undertakings, which are sitting on huge cash. Because of bureaucratic reason these entities prefer to put money in banks or as equity in projects rather than exploring more profitable opportunities. This can be one such opportunity,” a government official said.
According to reports, the lease rate is Rs 350 per sq ft and the rental per floor is estimated around Rs 35 lakh per month.
The building was the corporate headquarters of the airline till 2013. In February 2013, Air India officially vacated the building as part of its asset-monetisation plan, and shifted its corporate office to Delhi.
The government has started discussions for sale of Air India's iconic building in Mumbai to the country's biggest container port JNPT as part of efforts to raise funds for the cash-strapped national carrier, sources said.
Air India's 23-storey building at Nariman Point, Mumbai, which was also once the airline's headquarters, is a prime property and is likely to fetch high valuations.
The proposal to sell the building to Jawaharlal Nehru Port Trust (JNPT) also comes after the government's efforts of Air India strategic disinvestment failed to take off.
Prime Minister has given his in-principle approval for the proposed sale of Air India's iconic building to JNPT, says a report quoting sources.
"A committee comprising Secretaries from the Civil Aviation and Shipping ministries has been set up to decide on the valuation of the building," one of the sources said.
Air India and JNPT comes under the Civil Aviation and Shipping ministries, respectively.
At present, the thinking is that name of the building would not be changed after sale to JNPT. It is commonly known as 'Air India building', the sources said. The broader contours of the proposed deal are still being worked out. They also said that the building is a "cash cow" for the airline.
JNPT at Navi Mumbai, formerly known as the Nhava Sheva Port, is India's biggest container port. It handles around 55 per cent of the container cargo in the country and has annual profit worth Rs. 1,300 crore.
It handled 66 million tonnes of container cargo in 2017-18.
On June 26, Finance Minister Piyush Goyal had said the government is giving a new thrust to strengthen Air India's management practices and operational efficiencies while the disinvestment plan would depend on various circumstances.
"In the next 18 months, you will see the visible change," he had said.
The government has been pursuing asset monetisation plan of Air India for long and few properties have been sold so far.
In March this year, the Civil Aviation Ministry had informed the Lok Sabha that the airline mopped up Rs. 543.03 crore till then from monetisation of its assets in prime locations such as Mumbai and Chennai. The monetisation included the sale of six flats at Sterling apartment, Mumbai to the State Bank of India with each of these flats fetching Rs22 crore, the ministry had said. The ministry had also said the carrier collected Rs. 291 crore as lease rental from the Air India building at Nariman Point, Mumbai between 2012-13 and January 2018. Air India's debt burden is estimated to be more than Rs. 50,000 crore.
Posted by PSU revival at 10:50 AM